Try to cool down the “smuggled flow” across the Lang Son border.

VCN- As the Lunar New Year comes, present at some smuggling “hot spots” in Lang Son, such as Tan Thanh, Coc Nam, Huu Nghi, we saw that the work of anti-smuggling by the functional forces has become more difficult.

Just like every year, the closer Lunar New Year is, the more a bustling China is concentrated near the border of Lang Son. In particular, the "general warehouse" are concentrated in Guangxi Zhuang Autonomous Region (China). Every night, the leaders of smugglers through the trails and paths with hired people to move goods for gathering places in Hang Doi, Coc Nam, Tan My (Van Lang district) and Dong Dang township (Cao Loc district) and waiting for the appropriate time to load on vehicles to move to the other provinces for domestic consumption.

Following Canh Nam Customs inspection staff (the Lang Son Customs Department), a reporter from Customs Newspaper climbed up the white rock road at Lan river, nearly 100 meters long. At this time, border guards carried bags of sand, cement and steel bars to the top of the mountain to build barriers made of concrete, barbed steel to prevent illegal exit and entry, and illegal transport of goods cross-border. Representatives of Canh Nam Customs Office said that, although there was a barbed-wire and concrete fence, it was not enough to prevent it, so it should have further construction to "reinforce" the boundary to be more solid.

The construction work is urgently deployed here because only a foot step away, one is able to see the Chinese warehouse that is close to the foot of the mountain. Representative of Canh Nam border guard said that except for the gates locked to the 1106 landmark, the boundary line was closed, so the situation of smuggling of goods was much more restricted.

According to the Director of Customs Department Nguyen Van Chuong, when the functional force tightened up on smuggling activity it sharply reduced. However, at the end of the year, near the Lunar New Year, the demand for domestic consumption increased strongly, the smugglers often take advantage of the location of dangerous terrain and thin functional forces. Out of the control of the Customs, smugglers can hire border residents, especially in the sensitive areas of 1103, 1106, 1107 to smuggle inland, so the risk of smuggling is huge. Consequently, Coc Nam Customs Sub-Department coordinated with the Border Guard and Police Department to regularly meet, inspect and control people and means through the border areas, trails, shortcuts, to strengthen and build "fences" at critical points.

Mr. Hoang Van Trung, Deputy Head of Inspection Team, Tan Thanh Customs Department, Lang Son Customs Department, said that at this time, the whole unit has put control as the key task, staff continuously patrol 24/24. Day and night, despite the rains and sunshine, forces remained at the smuggling hot spots, trying to cool down the "smuggled flow" across the border.

According to the reporters, at some smuggling hot spots in Lang Son border area, functional forces of the province are struggling to cope with countless lines, shippers and carriers participating in transport of illegal goods. Those units must work as 24-hour standing troops at 21 key points on the border in rough conditions. Due to the thin force, the wide area, and the dangers, thus, every successful fight against smuggling crimes is really a tough battle. 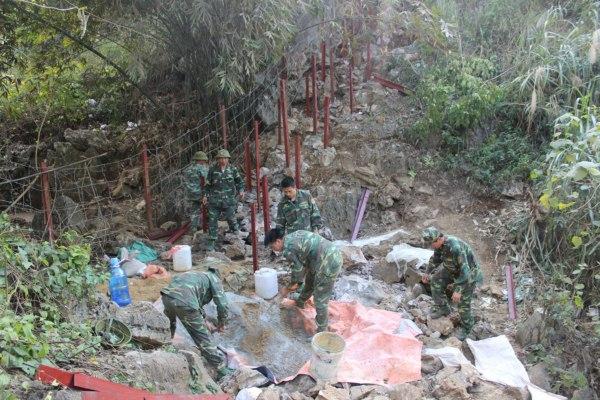 Staff and soldiers of Canh Nam Coast Guard are rushing to build a concrete fence and barbed wire above the area of Lan river. Photo: Hong Nu.

According to the report of the Lang Son Steering Committee 389, recently, the situation of smuggling in the province is showing signs of increasing again, potentially complex, mainly fraud on price, types of goods, and noticeably, the phenomenon of fraudulent import documents. Particularly, different from every other year, after gathering illegal goods to avoid the blocked points, the objects organized by the roads around the Cao Bang province, followed Highway 3 to transport back to Hanoi to distribute to the consumption places. This new tactic is causing 389 Lang Son forces to reinforce in many places to fight and arrest.

Just over a week ago, the anti-smuggling forces of the General Department of Customs seized 25 trucks, transporting more than 300 tons of illegal goods crossing the border in the northern provinces, most of which were in Lang Son. The seized goods include various types of intellectual property infringements, counterfeits of the "Made in Vietnam" products, and other well-known international brands.

Talking to the Customs Newspaper, Nguyen Cong Truong, Vice Chairman of the provincial People's Committee - Head of Steering Committee 389 in Lang Son province, said that sometimes when the functional forces are locked in this place, the smugglers work elsewhere. This is one of the hardest problems to overcome. On the other hand, in the course of performing the task, including from the border to the inland, functional forces also frequently encounter the drastic opposition of objects transporting and trading smuggled goods. There are more and more coordinated patrols in the border areas. At this point, in order to control tightly, especially during the Lunar New Year, the Lang Son Steering Committee 389 has directed the forces to strengthen the inspection and supervision activities of anti-smuggling of functional units, roles and responsibilities of heads of concerned branches and units.

"Particularly, the forces have checked and scrutinized the key areas, reinforced the blocking forces, controlled the border lines, formed the "anti-smuggling network" and organized the inspection, control in the province, strictly handled the smugglers, and not allowed the formation of large smuggled lines. Anti-smuggling activities and trade frauds have been carried out drastically by the provincial functional forces", said Nguyen Cong Truong.

VCN- According to the Customs Branch of Sai Gon port, Zone 1 (HCM City Department of Customs) and the Institute of Ecology - the Ministry of Agriculture and Rural Development, assessment results showed that more than 2 tons of smuggled ivory at Cat Lai port on October 6, 2016 were African ivory, on the list of prohibited imports and exports.

Based on MasterCMS Ultimate Edition v2.6 2016